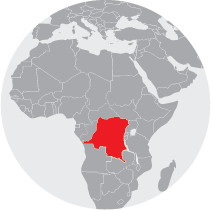 DEC member survey
All seven respondents in DRC agreed that, without increased funding, thousands would die of hunger in 2021. All also agreed that the pandemic was leading to a steep rise in childhood malnutrition.
100%
All seven agreed that the pandemic had worsened the humanitarian crisis there, with five strongly agreeing.
100%
All six who expressed an opinion said that the humanitarian crisis was the worst it had been for the last 10 years.
88%
Agreed
Strongly Agreed

When Covid-19 hit the Democratic Republic of Congo (DRC), the country was already coping with a number of epidemics which overshadowed the new virus. A huge measles outbreak which began in 2019 and continued into 2020 had affected more than 375,000 people and killed over 7,000 – the largest and most fatal of such outbreaks globally. Furthermore, a two-year Ebola outbreak was only drawing to a close in June 2020.22 (A new outbreak was confirmed in February 2021, with four cases and two deaths confirmed so far.) Covid-19 therefore brought another new illness to deal with on top of existing ones, delivering a significant blow to an already vulnerable, hungry population.

The DRC can draw some comfort from the fact that their experience with Ebola has helped them prepare for Covid-19. However, the beleaguered health system has been slow to respond, leading to the resignation of high-profile Congolese doctor and Nobel Peace Prize winner Denis Mukwege from a Covid-19 taskforce in Eastern DRC over the shortcomings.23 A lack of testing and laboratory capacity means it is impossible to fully gauge the true impact of the virus, which is now in its second wave.

The secondary effects are clearer, making an already precarious situation worse and pushing the country towards famine. Many people working in the informal economy have lost their jobs with no support mechanism in place. Prices are rising and the currency has devalued. Hunger is growing and the DRC now has the world’s highest number of people – 21.8 million – who are food insecure, unable to access sufficient, good quality food.24

In the country’s first Covid-19 wave, the majority of cases detected were in the capital Kinshasa, home to the only laboratory in the country and where most of the testing initially occurred, although testing was then widened. After stabilising, cases appear to be rising again in a second wave. There had been 25,079 confirmed cases and 700 deaths recorded by late February 2021.

Conditions are ideal for the spread of the virus with large families living in cramped, poorly ventilated conditions without access to running water. It is likely that cases are, in reality, far higher with statistics simply providing a limited view or ‘snapshot’ according to DEC member charity Tearfund who say that a doctor has told them they have never worked so hard nor seen so many patients in 25 years, with numbers doubling or tripling from usual levels.

Some aid workers have commented that deaths are relatively low, while others disagree, pointing to the number of gates standing open at people's properties; a local custom that is part of a funeral service.

The DEC’s Response Review found that the country’s health services have been slow to act, with PPE reaching hospitals and health centres late due to pandemic suppression measures and supply difficulties, although DEC members say this has now improved. Salaries of health staff were also delayed, leading to demotivation in some professionals who were exposed on the front line.

Many people have been reluctant to attend health services, due to apprehension about catching Covid-19 and lack of money to pay for transport to get there. Hebdavi Muhindo, Tearfund’s DRC country director, says: “It’s vital we continue to provide vaccinations to ensure that people are protected against other diseases like measles and polio; the focus must not shift away from that.”

Community and faith leaders are stepping into the breach, doing vital work providing advice to communities about how to stay safe. Muhindo says: “People are coming to them and saying they are scared, they don’t know what to do. How do I keep my children safe? We are making sure that faith leaders have the right information so that, when people come to them, they can shed some light for them, give them guidance and help them keep safe.”

During the Ebola crisis in DRC, the economic impact was harsher than the impact of the illness itself and the same pattern has followed with Covid-19. A national state of emergency and curfew in March 2020 introduced movement restrictions which hit farmers’ ability to tend and harvest crops, and in turn reduced work available to informal agricultural workers and food sellers.

“We’ve seen the tip of the iceberg and not the full impact yet… I believe the worse is still to come.” - Malik Allaouna, Save the Children

This has had a significant impact on food prices and households’ livelihoods. Staple foods such as rice and beans have been hard to find and have greatly increased in price. For instance, 50kg of beans rose from $37 before the pandemic to $62 in October.

Malik Allaouna, Save the Children’s DRC country director, says the Congolese franc lost around 20% of its value in just three months, and the price of basic commodities went up. “We’ve seen the tip of the iceberg and not the full impact yet… I believe the worse is still to come.”

Tearfund’s Hebdavi Muhindo agrees. “People are suffering a lot. We’re seeing people who’ve lost their income, who are going out every day and struggling even to find enough food to feed their children for that day. People are nervous and scared; they are just trying to focus on survival for the day.”

Hunger is rife in DRC, which is now the place with the highest number of people in the world who are food insecure – 21.8 million people or around a quarter of the total population. This includes 5.7 million people classified to be in IPC Phase 4 or facing ‘emergency’ levels of hunger between July and December 2020.25

Covid-19 has exacerbated long-standing hunger in the country and two-thirds of low-income households have seen their consumption of food and water decrease compared to before the pandemic.26 Tearfund’s Hebdavi Muhindo says: “My biggest worry for the communities we support is that they will go hungry; that we will see more malnutrition and more unexplained deaths.”

Conflict increasing displacement, with camps at high risk of Covid-19

The DRC has experienced conflict for more than two decades and the UN says the humanitarian situation in DRC remains ‘precarious and extremely fluid’ as a result of continuing conflicts between communities, and between non-state armed groups and Congolese security forces.27

Conflict has led to widespread internal displacement. With more than 5 million people living in camps, the DRC has the largest number of internally displaced people in Africa.28 Since the beginning of 2020, conflict has caused 600,000 people to be displaced, according to Save the Children’s Malik Allaouna. In displacement camps, health services are extremely limited and virus prevention measures are challenging due to crowded shelters, frequent movement in and out of the camps for work, and a lack of soap for hand hygiene.29

Past poverty-reduction successes are being reversed as funds are squeezed

DEC member charities say that funding to help deal with the pandemic has been very limited. Save the Children’s Malik Allaouna says he is very concerned. “We are seeing institutions significantly reducing their allocation of funding. We NGOs are starting a downsizing exercise – so, as needs increase, we are reducing our capacity.”

“Agencies are there on the ground, but we need more resources to continue the work we are doing.” - Hebdavi Muhindo, Tearfund

And he cannot see the situation improving soon. “From a global perspective, all countries are getting indebted to an extent we haven’t seen before. This will have a significant ripple effect and the ability and willingness of the North to allocate resources to a country [like DRC] which is as affected, if not more, is a very large question.”

As a result, gains made in the past are being reversed. Tearfund’s Hebdavi Muhindo says: “The challenge we’re facing is the magnitude of the problem – the increase in the number of people in need is overwhelming. People who were getting themselves out of poverty are going back into poverty; those who were poor are now facing extreme poverty.”

He adds: “Tearfund and other agencies are there on the ground, but we need more resources to continue the work we are doing, until the day comes when we can celebrate that we’ve kicked this virus out of this world.”

DRC was allocated 9% of the funds available for the first phase of the DEC’s coronavirus response. In the first three months of the response (up to the end of October 2020), four DEC charities – ActionAid, Christian Aid, Tearfund and Save the Children – used the largest share of expenditure in the first three months on water, sanitation and hygiene provision (41%) followed by healthcare services (25%).

9,000 people benefited from food packs including rice, flour, oil and cow peas and 146 individuals were able to earn money and protect people at the same time by being trained in how to produce masks and build handwashing stations.

More than 30,000 people were educated on gender-based violence and 20 women’s groups undertook a campaign called ’Stop SGBV in Covid-19’ in collaboration with local authorities.