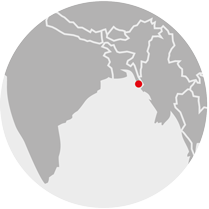 DEC member survey
All six respondents working in Cox’s Bazar agreed that the economic impact of Covid-19 had affected the ability of Rohingya refugees to buy food and other essentials, and that the pandemic had disproportionately affected displaced people there.
100%
However, all agreed that humanitarian action had helped prevent the spread of Covid-19 in the camps.
100%
Alarmingly, given that the refugees are dependent on food aid, half the respondents agreed that without increased funding, they were likely to see thousands die from hunger there in 2021.
50%
Agreed
Strongly Agreed

In the world’s biggest refugee camp in Cox’s Bazar, Bangladesh, there has not been a major outbreak of coronavirus so far. Although testing is limited in the camps, potentially supressing the true figures, there is no evidence that the virus has spread among refugees. As of mid-February 2021, there have been 396 confirmed cases and 10 deaths among the refugee population.

This success is partly due to swift and strict suppression measures implemented by the authorities, in the camps and outside, including months of lockdown and infection prevention and control; as well as the provision of water and handwashing facilities and Covid-19 awareness raising by DEC members and other NGOs. Some political leaders and religious figures played a pro-active role in controlling the virus by communicating with communities. Young people also performed a major coordination role.

Even so, the lockdown and the isolation it brought, as well as fears about the pandemic, have caused an increase in mental health-related troubles for refugees and for the host community. Levels of violence and abuse, including neglect, have risen, especially for women, young girls and older people. One survey showed married girls are more than twice as likely as unmarried girls to report that gender-based violence has increased in the community during Covid-19.41

In addition, there has been growing concern about the marked decrease in attendance at health centres for other illnesses and conditions.

Loss of livelihoods reduces access to food and sparks tensions

While the virus has not been felt as directly as in other places, the socio-economic fall-out from the pandemic has been very challenging. The DEC’s Response Review says that the district administration in Cox’s Bazar estimated that more than 700,000 people may have become jobless because of government restrictions related to Covid-19.

When people began working again in July, wages were lower but prices of supplies had increased.

Most vulnerable households in the host community who relied on day-to-day labour lost their income sources. Although refugees aren’t officially allowed to work outside the camps, it appears some of them were working on land owned by the host community which also wasn’t possible during the lockdown period.

When people began working again in July, wages were lower but prices of supplies had increased.
While people in the camps were able to access food from the World Food Programme, the host community did not have this safety net. This created and exacerbated tensions.

Despite this safety net, UNHCR says many Rohingya have become impoverished by Covid-19 and that girls have been particularly affected. In a survey, young people reported eating fewer meals per day.

The Rohingya response was allocated 19% of the funds available for the first phase of the DEC’s coronavirus response. In the first three months of the response (up to the end of October 2020), eight DEC charities – ActionAid, Age International, British Red Cross, Christian Aid, Oxfam, Plan International, Save the Children and Tearfund – used 75% of the funding spent to date on health activities including supporting an isolation and treatment unit, caring for people at home and providing PPE for medics, with a further 20% going to multipurpose cash assistance.

Four DEC members have provided PPE to 105 health workers and 133 community health workers have been trained in infection control, community-based surveillance and home-based care. People from 2,130 households received cash to help protect themselves from Covid-19 and to provide for their families and 2,810 individuals were reached through hygiene promotion messaging.