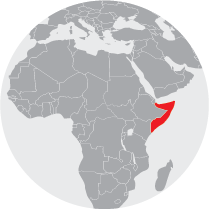 DEC member survey
All eight respondents in Somalia agreed that the Covid-19 pandemic had worsened the humanitarian crisis there.
100%
All agreed that the pandemic was leading to a steep rise in childhood malnutrition, with five strongly agreeing and that its economic impact had affected people’s ability to buy food and other essentials. In both cases five strongly agreed.
100%
Half agreed that the humanitarian crisis there was the worst it had been in 10 years - despite the severe droughts in 2011 and 2017. Only two disagreed.
50%
Agreed
Strongly Agreed

In Somalia, the pandemic and its economic consequences hit as the country was reeling from large-scale flooding, which displaced 500,000 people in 201930 and a further 500,000 in 202031, creating cramped living conditions and a lack of clean water, as well as washing away crops. The largest locust invasion for 25 years has also been eating crops across the region, spurred on by the rains. Getting access to food was a daily struggle before Covid-19 and is now getting worse.

“[Covid-19] challenges our ways of working, our energy and our funding. How long are we going to be facing this crisis? How can we plan for it?” - Ahmed Khalif, Action Against Hunger

Chronic insecurity linked to the rise of al-Shabab in the mid-2000s and recurrent natural disasters have resulted in Somalia being consistently ranked as one of most fragile states in the world.

Ahmed Khalif, country director for Action Against Hunger, says: “The situation is really challenging our ways of working as a humanitarian organisation. We are used to responding to flooding, drought and displacement due to conflict. But, with Covid-19, we find ourselves in a protracted kind of crisis that is a live but also invisible crisis. It challenges our ways of working, our energy and our funding. How long are we going to be facing this crisis? How can we plan for it? That is the biggest worry I have as a humanitarian.”

Lack of testing leads to underreporting of Covid-19 cases

Deaths from Covid-19 have been lower than feared with official figures showing that 215 people had died and 6,444 people had tested positive by late February 2021. However, anecdotal evidence suggests that there was a more deadly first wave of Covid-19 than the official numbers indicated, with older people and displaced people the worst affected according to DEC member Islamic Relief. In Mogadishu, the number of graves being dug went from 1-5 per day in normal times to 30-40 per day in May and June last year.

Sadia Allin from DEC member Plan International says: “Every day when I open my Facebook there are so many messages about deaths and condolences – the relatives, friends of people that have died. The number is very high but the official figure is 124 deaths. Absolutely it can’t be that number; it is deeply underestimated.”

“Every day when I open my Facebook there are so many messages about deaths and condolences… it is deeply underestimated.” - Sadia Allin, Plan International

At the outset of the pandemic, Somalia had no laboratories with the capacity to diagnose coronavirus, so tests had to be transported to Kenya, with long waiting times for results.

Testing has also been challenging in areas not held by the government and, with such large gaps in the data, it is hard to read the situation. Ahmed Khalif from DEC member Action Against Hunger says: “There are still a number of districts which are silent, which means there isn’t concrete data for them due to access challenges. This covers about a third of the country.

“And there is still a stigma due to isolation measures, which makes people hide and not seek services.” The DEC’s Response Review also found that many cases were not reported due to several factors including the fear of stigma, concerns that hospitals might have become sites of contamination, and the spread of disinformation about Covid-19.

The DEC’s Response Review found that the pandemic had weakened the already fragile health system, and peeled away hard-won gains over the past several decades. There was an emphasis on the virus, so other basic health services were neglected, especially maternal and child health services.

Aid distribution and community assistance were affected by the initial lockdown and travel restrictions, slowing down aid agencies’ ability to deliver the most basic human needs. For instance, camps for displaced people rely on water being supplied by truck as there is no long-term infrastructure. At some camps, aid workers report that some charities were unable to deliver water due to restrictions.

But there have been some success stories with changed practices; for example, the World Food Programme provided two months of rations at a time rather than one month to reduce exposure, and the use of mobile cash transfers to replace in-person interactions has grown.

The secondary effects of the virus have, however, been much more harshly felt. Somalia’s informal economy, based on remittances, imports and agriculture, has been heavily hit. The economy of Puntland in the north has been particularly damaged by lowered remittances, while livestock exports were hurt by border closures and travel restrictions. Imports were also affected, depleting supplies for markets. Female-owned businesses have been especially hard-hit, reflecting gender inequalities in the country, with 98% reporting reduced revenue.32

The DEC’s Response Review said the economic disruption resulted in a deterioration in both living conditions and in family solidarity as individualism and selfishness increased. “Every family could barely count on their meagre savings,” it reported. Negative coping mechanisms are being seen by aid workers. Plan International says girls have been pushed into forced and early marriage.

The UN’s Cindy Issac believes the worst socio-economic effects will come this year: “The cost of doing business has just gone up, and the cost of basic commodities also went up during the last 10 months. We're not seeing the full impact yet.”

Scarcity of food means many families only eat once a day

The DEC’s Response Review found that many families could eat only once a day because of the scarcity of foodstuffs resulting from the economic hardship caused by the pandemic, reporting that some families in the regions visited were experiencing “great difficulty” in meeting their food needs. This is likely to lead to a deterioration in their health with an increase in cases of malnutrition.

Between October and December 2020, more than 2.1 million people across Somalia were expected to face high levels of acute food insecurity (IPC Phase 3) or worse, in the absence of humanitarian assistance. In addition, 849,900 children under the age of five will likely be acutely malnourished through to August 2021.33

The political situation in Somalia is concerning, with the prime minister impeached and a number of demonstrations and explosions in Mogadishu and Baidoa. Elections are being held in February and the security situation may continue to deteriorate until then and afterwards.

The UN’s Cindy Issac said rolling out the vaccination campaign in non-government controlled areas will be challenging “with large segments of the population that remain very difficult to reach”.

Multiple crises will keep Somalia in a perilous place throughout 2021

“The reality is that we are expecting the overall socio-economic impact to really start this year, and the year to come.” - Cindy Issac, UN

Cindy Issac says there are early predictions of a looming drought in Somalia, as well as outbreaks of diseases such as acute watery diarrhoea and cholera. “We're going to have to continue to focus on the most life-saving needs,” she says, with Covid-prevention measures focused on delivering clean water and sanitation services. “The reality is that we are expecting the overall socio-economic impact to really start this year, and the year to come,” she adds.

Ahmed Khalif from Action Against Hunger is also concerned about the year ahead: “Given that we are already facing multiple crises including desert locusts and flooding which affected nearly a million people in 2020, the humanitarian situation remains worrying in the country.” The upcoming elections could cause more disruption, and the effects of the pandemic have added to concerns.

“We know Somalia needs just two simultaneous crises and a reduction of humanitarian assistance to go into a famine situation,” says Khalif.

Somalia was allocated 11% of the funds available for the first phase of the DEC’s coronavirus response. In the first three months of the response (up to the end of October 2020), five DEC charities – Action Against Hunger, ActionAid, British Red Cross, Islamic Relief and Plan International – used 71% of the funds spent to date to provide livelihoods and multipurpose cash assistance to those most in need.

DEC members have been providing support across the country from Sanaag and Toghdeer in the north to Bay and Lower Shabelle in the south. They have, for example, supported 21 health centres, which included providing PPE for more than 4,000 health workers as well as training. Action Against Hunger provided nutritional support to children suffering from severe and acute malnutrition.

Community and religious leaders were also trained to educate people about Covid-19, dispelling myths and misconceptions about the virus.

DEC members constructed 28 new handwashing stations and provided water tanks and soap and water to 50 existing stations in health centres and other public places. Water and sanitation items such as soap and buckets were provided to 1,900 households and more than 21,000 people received information on hygiene promotion.

Around 2,500 households received cash assistance, including people with disabilities, lactating mothers, large families with no reliable source of income, and families hosting unaccompanied and separated children. Around 2,300 households used their cash to buy seeds and fertiliser and to pay for ploughing services and water.

Plan International’s local partners aired radio messages on the need to protect young girls from the risks of violence, exploitation and abuse, which have been exacerbated during the pandemic, reached 750,000 people.