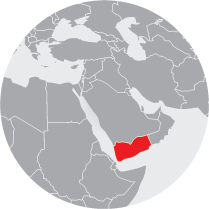 When Covid-19 hit Yemen, the country had already suffered six years of war, more than 3.65 million people had been forced to flee their homes, 20 million people were struggling to access enough food every day, 2 million children required treatment for acute malnutrition, and only half of healthcare facilities were in operation. As a result, it was predicted that Yemen would be devastated by the virus.

The pandemic has struck the country hard, but people in Yemen often regard Covid-19 as ‘just’ one more illness to be faced in a society where every problem is getting immeasurably worse, exacerbated by the pandemic. There’s a sense that anything that can go wrong in Yemen has gone wrong.

“We must get enough funding so that we can respond and prevent a catastrophe from happening.” - Yousra Semmache, Save the Children

While the true number of Covid-19 deaths is unclear, the secondary effects of the virus – hunger and malnutrition – are very visible. Aidan O’Leary, Head of UN OCHA in Yemen, says: “Due to conflict and macro-economic deterioration, the situation in Yemen was bad. Covid is taking it to a different level. We are on the verge of famine and we risk being in a very serious famine in six months’ time."

Yousra Semmache from Save the Children Yemen agrees: “The escalation of violence at the same time that we are not receiving the appropriate level of funding contributes to the risk of famine. We must get enough funding so that we can respond and prevent a catastrophe from happening.”

Early forecasts predicted that Yemen would pay a very high price. But the government has been downplaying the pandemic’s existence. No information about Covid-19 cases is available for the Northern governorates, and in the South the authorities have been accused of refusing to release official data.

WHO estimates, which are believed to be low because of non-reporting and little testing, show only 2,191 confirmed cases and 621 deaths by late February 2021. The London School of Hygiene and Tropical Medicine has however estimated from satellite imagery of cemeteries that there were 2,100 excess deaths in Aden alone between April and September, a 60% increase on normal levels.21 The WHO and Medecins sans Frontieres (MSF) are conducting sero-prevalence testing to determine the true level of infection and it is expected to be very high.

After a pause in the autumn, it is believed that a second wave is beginning, with concern the new variant will hit hard.

Healthcare workers are at higher risk of Covid-19 and the country’s operable health centres are suffering from a lack of doctors and nurses because of illness or death. Others are not prepared to work because of the risk caused by lack of PPE, or because they have not been paid. (Due to a lack of liquidity in the central bank, the government cannot pay public sector workers.)

The UN’s Aidan O’Leary estimates only 30-50% of healthcare facilities are currently partially or fully open, despite cholera, diphtheria, dengue and malaria also being endemic in the country, and an outbreak of polio in the north-west. Fear of getting Covid-19 has led to reductions in attendance for other chronic conditions and delayed diagnosis. Maternity care has dropped by 40%, and immunisation levels have fallen.

DEC members are taking their duty of care to beneficiaries and employees seriously, employing social distancing, PPE and other suppression measures. Inevitably these have slowed down front-end service delivery such as food distribution and malnutrition clinics by a third, according to the UN, because crowd sizes need to be reduced and staffing levels increased. For services where demand has increased, such as those dealing with gender-based violence, there is also less capacity to respond.

Yemen was in a very poor economic position before Covid-19, and the pandemic’s effect on the global economy has made things worse. The currency, the rial, has lost two-thirds of its value since the conflict began and continues to slide at an alarming rate so purchasing power has reduced while food prices have risen.

Basic goods are now beyond the reach of many ordinary people and it is hard for families to feed themselves, with aid workers saying the cost of flour has risen by 20% in the last year and sugar by 50%. Remittances from Yemenis working abroad in the Gulf have reduced by between 50% and 70% because of the global downturn: making ends meet is now impossible for many. This also means that children are more at risk of child labour and child marriage.

DEC members are concerned too about availability of, and price hikes in, fuel which is crucial to their work, powering water pumps and hospital generators.

“We're on the verge of famine and we risk being in a very serious famine in six months’ time.” - Aidan O’Leary, UN

As a result of food insecurity, the spectre of famine is looming. Integrated Food Security Phase Classification (IPC) figures show that for the period July to December 2020, 45% of the analysed population were facing high levels of acute food insecurity (IPC Phase 3 or above), despite ongoing humanitarian food assistance and approximately 16,500 people were in Phase 5 (Catastrophe). This is projected to rise by June 2021 to 5 million in the Emergency category (IPC Phase 4) and 47,000 in Phase 5 if humanitarian food assistance is kept at the current levels. Phase 5 is defined as: “Even with any humanitarian assistance at least one in five households in the area have an extreme lack of food and other basic needs where starvation, death, and destitution are evident.”

Aidan O’Leary from the UN says: “We're on the verge of famine and we risk being in a very serious famine in six months’ time.”

In February, four UN agencies issued a warning that 2.3 million children under the age of five are projected to suffer acute malnutrition in 2021 – half of all children under five in Yemen. Of these, 400,000 are expected to be severe cases, meaning they could die if they don’t receive urgent treatment. This warning has been accompanied by increasingly distressing media reports emerging of weak and starving children.

Delivering aid in Yemen has been challenging throughout the conflict but Covid-19 has further complicated delivery. At the start of 2020, there were 35 frontlines but, by the end of the year, this had increased to near 50, with the hotspots shifting, and fighting not only north against south but within the south of the country too. Aidan O’Leary says: “This is a conflict that's not just staggering on; it's intensifying.” Conflict and violence spills into ordinary life – when there were attempts to close markets to reduce infections, the result was protests with gunfire and the markets remained open.

Yousra Semmache from DEC member Save the Children said infected people are scared of going to treatment centres because of the conflict. “Doctors can hear the shooting and fighting. So, you can imagine the context health workers are trying to work in. It is harder for people to access health treatment due to this; the lack of funding, lack of PPE, and hospitals being routinely targeted – this all makes people fear going to the hospital.”

Access is another issue for DEC charities, with long negotiations with the warring parties delaying aid delivery.

Reduction in funding is leading to humanitarian aid cuts

In 2019 Yemen received $3.5 billion of aid funding to reach 14 million people with humanitarian assistance every month. In 2020 they received just $1.6 billion, so were only able to reach around 7-8 million people.

Between April and August 2020, aid agencies were forced to reduce food distributions, cut health services in more than 300 facilities and halt specialised services for hundreds of thousands of traumatised and highly vulnerable women and girls. About 9 million people have been affected by reductions in food assistance since April. The DEC’s Response Review reported that, if resources were not provided by the end of 2020, a total of 9 million people would also lose access to basic healthcare services.

Aid workers confirmed that the lack of funding is affecting vital services. “We are having to make quite difficult choices about where we focus our activities,” says Hannah Cooper from Oxfam Yemen, while Yousra Semmache from Save the Children explains: “With malnutrition, we have kept the most life-saving services and clinics open but with some we can’t provide other primary healthcare services anymore.”

Yemen to face hard choices about basic human needs in 2021

“Ultimately, you're being asked to choose between having health facilities that are not functional, or acute malnutrition.” - Aidan O’Leary, UN

The UN’s Aidan O’Leary says the focus for his organisation and other INGOs in 2021 will be trying to prevent famine, maintain a minimally functional health system and water sanitation system to manage disease burden, and support an internally displaced population of up to 4 million people. “But we will not have enough money to do all of that, which means that there's going to be real hard choices in terms of prioritisation.

“We need to be really clear about where those choices are going to be. Ultimately, you're being asked to choose between having health facilities that are not functional, or acute malnutrition. We are facing rising needs in what's going to be a challenging funding environment.”

Hannah Cooper from Oxfam agrees: “If a second wave hits this will be in the context of increased displacement, economic collapse meaning people can’t buy food for themselves, and a health system that isn’t functioning and hasn’t been strengthened for a second wave. It’s an incredibly worrying situation to be working in.”

Yemen was allocated 15% of the funds available for the first phase of the DEC’s coronavirus response. In the first three months of the response (up to the end of October 2020), six DEC charities – Action Against Hunger, British Red Cross, CARE International, Oxfam, Save the Children and Tearfund – used 51% of expenditure on food assistance and 27% on water, sanitation and hygiene services, with health and nutrition assistance making up around 19%.

Support has been provided across the country from Hajjah in the north, the capital Sana’a in the centre and Lahj in the south. Examples of how DEC members have been using DEC funds to tackle the pandemic include supporting 17 health facilities with medicines, equipment and on-the-job training. Several health facilities have also received stipends for staff, PPE for health workers and support with water supplies and sanitation services.

A further 273 community health workers have been trained in Covid-19 infection and control and almost 30,000 individuals have been reached with hygiene promotion messages. More than 9,000 people have received hygiene items, such as soap, disinfectant, masks and gloves. Member charities stressed the importance of education and awareness, as many community members did not wear masks before the projects were implemented.

DEC members have screened vulnerable groups for malnutrition and provided treatment in severe cases. Around 13,600 people have been educated on nutritional requirements for young children and pregnant women. More than 10,000 people received food parcels including flour, kidney beans, lentils, oil, sugar and salt.